Towards the end of the century before last, an ambitious young man came to an expanding industrial town. Born in Wem, close to the North Wales Border, Robert James Stokes had begun his working life in 1887 when his father persuaded him to abandon a profitable newspaper delivery round to become apprenticed to J. F. Smith, a paint and varnish merchant in Yorke Street in Wrexham.

In 1894 he moved to Liverpool to work for R. R. Minton, firstly in Liverpool, then moving to their branch shop in Leeds. Now, in 1895, Robert James Stokes had been sent by Minton to open their new shop in Sheffield.

Apparently Robert found Sheffield a friendly place, and developed his social life by way of the Brunswick Weslyan Chapel, demolished in the 1950's but within a few hundred yards of the present tile shop. Through this he met his future wife, Sabina Himsworth. By now he must have made the decision to set up in business on his own account, for when they became engaged in 1897, they decided to delay the marriage until the enterprise was established. This was achieved two years later, in 1899, when he moved into premises at 62 Cambridge Street in the city centre to set up a small retail paint shop with help from his brother Walter.

With little money to spare the shelves were in fact stocked largely with empty tins. However, the illusion worked, the shop prospered, and in 1903 Robert opened a second in Packers Row, Chesterfield, introducing his eldest brother Frank to manage it.

Three years later trade had outgrown the small Cambridge Street shop, so Robert had new, larger, premises built further up the same street. In 1913 he bought his late master's business in Wrexham's Yorke Street, and had another brother, William, run that.

Growth was steady and secure, and as trade grew, Robert introduced his family into the enterprise; first brother Walter, then Frank, William, Herbert George, Thomas Henry, and in 1915, when war recruitment created severe staff shortages, his schoolboy son Edwin Goddard.

The business had succeeded by selling paints and varnish. After the First World War with trade in a healthy state, a decision was made to expand by moving into their manufacture. To this end, land on Little London Road in Sheffield was bought and in 1921 a paint mill and varnish kitchen were operating. In 1925 the firm was made into a limited company.

The next ten years brought new shops in Chesterfield, Sheffield, Wrexham, and Rotherham, and extensions to the paint factory. 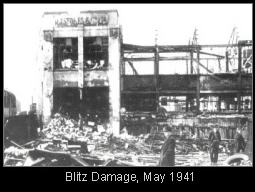 In the forty years up to the outbreak of the Second World War the enterprise had become a limited company involved in retail and manufacture, and owning buildings and land in four towns. The war, inevitably, brought change. Many of the employees were called up immediately, being in the Territorials, and others followed, although R. J. Stokes was eventually scheduled under an "Essential Works Order", which meant they were able to retain the remainder of their staff.

By order of the Ministry of supply all private sales of decorating materials were stopped, with the exception of those to be used to repair blitz damage. However, the company was appointed to manufacture camouflage paint to help protect the steel works. They also supplied many Army and Air Force units. As with many towns and cities, Sheffield was heavily bombed during the war. Perhaps fortunately for the major war effort, the prime targets, the city's East End steelworks, went largely unscathed.

However, the paint factory, on the opposite side of town, was hit by German bombs on the night of May 9th. 1941.

Extensive damage was caused by the bombs and subsequent fire. Particularly the No. 1 Paint Mill and the stockroom and contents were destroyed.

This must have been an awful shock for Robert Stokes - half a lifetime's work destroyed in a single night.

However, there was no time to waste. The next morning Robert Stokes was in the builder's offices, planning and engaging him for the rebuilding. Permission had to be obtained for the work, but given the importance of the factory to the war effort the Reconstruction Panel of the Ministry of Supply allocated labour and raw materials and the work was completed in six months.

Immediately following the war, plans were made to further increase capacity, but, given the restrictions then existing on labour and materials, and without the urgency that war had demanded, a building licence was not granted until 1952 and the work finished in 1954. By then the demand for paint had eased and industry competition was keen.

Specialist, industrial paints, coatings and "own brand" domestic paints for other retailers are now produced by the factory.

Robert Stokes died in 1953. He was succeeded as Chairman and Managing Director by his son Edwin who, on his retirement, was subsequently succeeded by the present Robert J. Stokes. Today 3 members of the fourth generation of the Stokes family are directors of the company. Now the company added another side, ceramic tile distribution, to its operations.

It was R. J. Stokes jr's decision to expand into the tile business. In 1972 a new building incorporating a tile showroom and warehouse was built at Moore Street in Sheffield, and it was here that the venture was established in 1972. The move has obviously been the right one. Over the succeeding years, as the distribution network expanded, the Moore Street site has seen the addition and acquisition of three more warehouses and a fleet of eighteen lorries to supply the distribution area.